Pineapple Apples in England in October 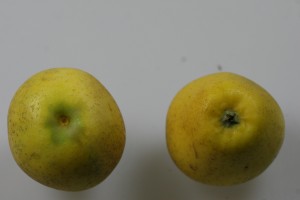 Pitmaston pineapples are not what it “says on the tin”. But they are next best thing. If you have never tried a Pitmaston Pineapple apple then you are missing out; it is typical of the type of fruit this site is trying to promote.

It is a funny little thing, small at maybe only three inches long, conical in shape and golden yellow with slight russeting when ripe. It is a child sized apple but don’t let the kids eat them all (my grandaughter loves them and is therefore an exception to the rule…) as these little apples pack a punch well above their weight.

The flesh is creamy and the texture is crunchy – a really ripe Pitmaston Pineapple cracks when you bite it. It had better because they are so small that you will only get 2 or 3 bites; BUT the taste is sensational. No other apple tastes quite like it.   Lightly acid with masses of sugar and a flowery scent. Deliciously sweet for the first 5-10 seconds and then an absolutely unmistakable after-taste of pineapple rushes in and a grey, chilly, windswept Somerset (as it often is in October) suddenly becomes Jamaica.

And it does not do this just in Somerset actually, I just live here. The Pitmaston Pineapple was bred in Worcestershire as so many good apples have been. It was bred  (by a Mr White who managed the orchards of Lord Foley of Whitley) in the town of Pitsmaston, near Worcester. Lord Foley sold it to Mr Williams a losal nurseryman who introduced it to a wider market towards the end of the eighteenth century. It was a seedling of Golden Pippin but neither Mr White nor Mr Williams ever revealed the other parent (if either ever knew).

Pitmaston Pineapple trees are heavy cropping, have excellent disease resistance (they are especially resistant to apple scab) and are as tough as old boots. They are self sterile, which means that they cannot pollinate themselves but they will pollinate and be pollinated by fertile and self sterile apples in apple pollination groups C,D and E. They will grow pretty much anywhere that apples can in the UK so they work well in frost pockets, higher locations and in the North and Scotland. As a spur fruiting apple, it is suitable for training against a wall as a cordon or espalier.

Which is a good thing because Pitmaston Pineapple is one of those apples that get children (and adults) interested in fruit. Every orchard or garden should have one.

A crab apple tree helps the pollen go down